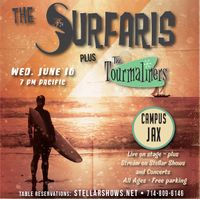 The Surfaris + The Tourmaliners Surf Showcase

Initially catapulted by the California surf culture, The Surfaris transcended the local scene into international stardom with their hit song "Wipe Out." In 1962, Bob Berryhill (15), Jim Fuller (15), Pat Connolly (15) and Ron Wilson (17) from Glendora, California formed The Surfaris.

On a cold December night in 1962, these four young men wrote Wipe Out in the studio after recording Surfer Joe. With the help of manager Dale Smallin (Wipe Out laugh intro) and recording engineer Paul Buff, The Surfaris recorded the 1963 hit version of Wipe Out and Surfer Joe.

From there, the band went on to play teen centers and dance halls around Southern California. With the help of their fans, the new surf music craze, music publishers, radio DJ's, and Dot Records, Wipe Out rose to #2 on the Billboard charts. Like the band "The Wonders" in Tom Hank's classic film "That Thing You Do," The Surfaris were catapulted into international stardom in about 6 months. Billboard posts the "Hottest 100 Songs of Summer in 1966." Wipe Out went back up to #16 in '66.

The Surfaris were invited to perform on music tours of Hawaii, Japan, Australia, New Zealand and across the United States. They began sharing the stage with legendary acts like The Beach Boys, Roy Orbison, Jan and Dean, The Righteous Brothers, The Turtles, Dick Dale, and The Ventures among others. The Surfaris made numerous television appearances including performances on Shivaree and Ninth Street West. The original line-up of the band performed from 1962-1966.

From the 1960's to today, The Surfaris founding members have continued performing live with various side players filling in as needed. Original members Jim Fuller (guitar), Ron Wilson (drums) and Jim Pash (sax) have since passed away. Original bass player Pat Connelly no longer performs.

Bob Berryhill is currently the only original founding member of The Surfaris that officially performs and records as The Surfaris. Bob's current Surfaris line-up continues to tour playing their hits including Wipe Out, Surfer Joe, Point Panic, Similau and others. Bob Berryhill's Surfaris have recorded two modern albums "Wipe Out" and "The Surfaris Hurley Sessions."

This band excels at surf favorites such as The Ventures “Walk Don’t Run,” but also includes plenty of other hits of the era as well, breathing new life in to songs such as “Money” and Gary U.S. Bonds “New Orleans,” with spirited performances. Led by guitarist Deven Berryhill and featuring drummer Jake Najor, the band also includes originals from albums, Tourmaline Dream and Amber in their set, with tunes such as “Point Break,” sounding as good as the classic tunes of their influences.

Reservations and an entree required. Yes, these shows will also be streamed live on Facebook and on YouTube at Stellar JAX channel as they happen. StellarShows.net for more details