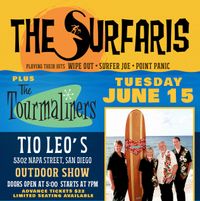 The Surfaris + The Tourmaliners - Live At Tio Leos

Tickets are for general admission, first come first serve table seating and standing. This is an outdoor show with fencing around the perimeter of the event. Tickets are also available at the gate, first come first serve. The show is all ages. Gates open at 5:00pm. Dinner & drinks will be served until 9pm. Tio Leo's Mexican Restaurant is at 5302 Napa St. San Diego, CA. 92110. For more info tioleos.com/music The SURFARIS: Playing their hits WIPE OUT - SURFER JOE - POINT PANIC Initially catapulted by the California surf culture, The Surfaris transcended the local scene into international stardom with their hit song "Wipe Out." In 1962, Bob Berryhill (15), Jim Fuller (15), Pat Connolly (15) and Ron Wilson (17) from Glendora, California formed The Surfaris. On a cold December night in 1962, these four young men wrote Wipe Out in the studio after recording Surfer Joe. With the help of manager Dale Smallin (Wipe Out laugh intro) and recording engineer Paul Buff, The Surfaris recorded the 1963 hit version of Wipe Out and Surfer Joe. From there, the band went on to play teen centers and dance halls around Southern California. With the help of their fans, the new surf music craze, music publishers, radio DJ's, and Dot Records, Wipe Out rose to #2 on the Billboard charts. Like the band "The Wonders" in Tom Hank's classic film "That Thing You Do," The Surfaris were catapulted into international stardom in about 6 months. Billboard posts the "Hottest 100 Songs of Summer in 1966." Wipe Out went back up to #16 in '66. The Surfaris were invited to perform on music tours of Hawaii, Japan, Australia, New Zealand and across the United States. They began sharing the stage with legendary acts like The Beach Boys, Roy Orbison, Jan and Dean, The Righteous Brothers, The Turtles, Dick Dale, and The Ventures among others. The Surfaris made numerous television appearances including performances on Shivaree and Ninth Street West. The original line-up of the band performed from 1962-1966. From the 1960's to today, The Surfaris founding members have continued performing live with various side players filling in as needed. Original members Jim Fuller (guitar), Ron Wilson (drums) and Jim Pash (sax) have since passed away. Original bass player Pat Connelly no longer performs. Bob Berryhill is currently the only original founding member of The Surfaris that officially performs and records as The Surfaris. Bob's current Surfaris line-up continues to tour playing their hits including Wipe Out, Surfer Joe, Point Panic, Similau and others. Bob Berryhill's Surfaris have recorded two modern albums "Wipe Out" and "The Surfaris Hurley Sessions." The Tourmaliners The Tourmaliners (pronounced The Tur – Mo – Leen – ers) get their name from a special place in San Diego, California nestled between Windansea and Pacific Beach. “Tourmo,” as locals call it, hosts a surf culture that embodies the spirit of Aloha represented by Tourmaline surfing pioneers like Skip Frye and Larry Gordon. The Tourmaliners debut album "Tourmaline Dream" was awarded the 2019 "Album of The Year" in Pipeline Instrumental Review UK and was nominated for 2020's "Rock Album of The Year" by the San Diego Music Awards. Since The bands start in June 2018, they has performed a “residency” at the legendary dance spot Tio Leo’s Lounge in San Diego. The band has also performed at various events such as the 18th annual Gator By The Bay Festival and the Almost Annual Tourmaline Tailgators event. In June 2020, the Tourmaliners signed with surf music label Altered State Of Reverb out of Washington DC. A re-release of the bands album "Tourmaline Dream" is now available on ASoR. The band released their new "Surfin' Christmas Carols" album on 12" vinyl, CD and digital on the ASoR label in late October 2020 with 300,000 plus streams on Pandora & Apple Music since the release. The album is also nominated for a 2021 San Diego Music Award for "Best Local Recording." The Tourmaliners feature Bob Berryhill's (The Surfaris) son on lead guitar.